We're here to help. Send us an email at:

and we'll get back with you as soon as possible.

What does it take to remain faithful during a season of loss? Bishop David Bard asserts that, as followers of Jesus, learning about self-giving love is important … 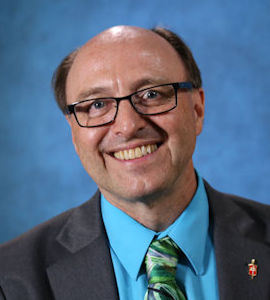 Psalm 116:10 is rather startling. “I have remained faithful, even when I said, ‘I am suffering so badly!’” (Common English Bible) Life for all of us, including people of faith, involves hurt, pain, suffering, and loss.

Loss. There seems plenty to go around. Every Friday for the past number of weeks, The PBS News Hour profiles a few people who have lost their lives to COVID-19 during the coronavirus pandemic. There are young and old. There are people from all backgrounds racially and ethnically. These people are someone’s sister or brother, someone’s parent, someone’s child. Some are highly educated, and some not so much. A few are well-known, most not. Our hearts go out to all who’ve lost loved ones to this pandemic.

Then there are those who’ve lost jobs or businesses. Behind all the statistics from the Labor Department or the Department of Commerce are real people and families who not only suffer loss of income but loss of part of who they are. Our hearts also grieve these losses.

I’ve not experienced those kinds of losses, but I know some of you have. I hold you in my heart and my prayers. Like all of us, I have experienced other kinds of losses. While we were able to accomplish our needed work in a virtual annual conference, for which I am grateful to so many people, the inability to be together is a loss. This summer, I was supposed to officiate at a funeral for my uncle Albert, who died nearly a year ago. His family had put the service off until people could gather in Duluth, MN. The service had to be postponed. Julie and I were going to participate (run/walk) in a half marathon in Duluth in June. It is a festive weekend in my hometown, and we were looking forward to it. The event was canceled, though Julie and I completed the half-marathon in our neighborhood on a cool morning. There were no crowds. Lake Superior was nowhere in sight.

In July, our children and I had planned to surprise my wife Julie with a trip to New York to catch a couple of shows in celebration of Julie’s birthday. Instead, our children were able to visit us in Lansing for the celebration, nice, but different. Julie and I were to travel to Oberammergau, Germany with some of you for the Passion Play. The Passion Play has been postponed until 2022. I miss preaching in person. I miss celebrating church anniversaries with you. I miss traveling around the state to see you. I even miss committee meetings that no longer happen in person.

Loss, yet also opportunities for learning. We are learning new ways of worshiping. We are finding creative ways to connect. As I write this, I know that this coming Sunday (August 30), I will be part of four different worship services in the conference. One church is showing the opening worship for annual conference while their pastor is on vacation. Two other churches have interviewed me and are including this in their morning worship, and I am preaching live at an outdoor worship service at a church celebrating their 150th anniversary. It reminds me of a three-point charge, but without driving between churches with my clergy robe on because I am running behind. Our conference committees and groups are learning to do their work virtually, and we will incorporate more virtual meetings into all our work in the future. Thus, we are finding new ways to use our financial resources better.

Not everything being learned is positive. I am learning that for some, the essence of the grand word “freedom” involves not wearing a face-covering even when it benefits others. To do so, in the eyes of some, makes one a “sheep.” I think we can do better. In an essay in the September issue of The Atlantic, the writer asks why the pandemic has been particularly troublesome for the United States as compared with other developed nations. Among his learnings, and now mine: mixed messages; an underfunded public health infrastructure; a relatively inefficient health care system that includes the link between employment and health insurance; policies that have long disadvantaged Indigenous and Black persons; and “the same social media platforms that sowed partisanship and misinformation during the 2014 Ebola outbreak in Africa and the 2016 U.S. election became vectors for conspiracy theories during the 2020 pandemic.” The same social media that I have so grown to appreciate as a tool for ministry also spreads misinformation and exacerbates division.

I am also learning to continue to hold together faith and the experience of loss. In his recently published book Virus as a Summons to Faith, Walter Brueggemann writes, “The work of ministry is to render the virus as penultimate, to see that the goodness of God outflanks even its lethal force. … Jeremiah anticipated that the wedding, singing, and dancing would begin again, perhaps soon. In the meantime, he waited with truth-telling, honesty, and courage.” (p. 32-33). The loss is real, so, too, the goodness of God, and we shall sing and dance again. Maybe we only learn certain things in particular ways when we experience loss.

I could end here, but I am also thinking of something else I read about loss recently. In a powerful essay entitled “Contempt as a Virus,” Zadie Smith penned these words: “You start to think of contempt as a virus. Infecting individuals first, but spreading rapidly through families, communities, peoples, power structures, and nations. … In the eyes of contempt, you don’t even truly rise to the level of a hated object – that would involve a full recognition of your existence. Before contempt, you are simply not considered as others are; you are something less than a whole person, not quite a complete citizen. Say … three-fifths of the whole ….  It’s a naïve American who, at this point, thinks that integration – if it were ever actually to occur – would not create some initial losses on either side.”

On August 28, 1955, 14-year-old Emmett Till, an African-American boy, was kidnapped and murdered while visiting relatives in Mississippi.  His offense was the way he interacted with a white woman. His badly beaten body was found three days later, and at his funeral, his mother insisted on an open casket so the world could witness this American nightmare in the battered face of her son.

Eight years later, August 28, 1963, at a March on Washington, the Rev. Dr. Martin Luther King, Jr. spoke in soaring and eloquent terms about his dream for this country, a dream deeply rooted in both the gospel and in “the American dream.”  Can we live into this dream without also remembering the nightmares too many have experienced in our history?

As followers of Jesus, whose self-giving love invites us to our own self-giving love (Philippians 2), are we willing to lose our naïve versions of our history, stories that ignore the long-term ripple effects of slavery and segregation, segregation both legal and tacit, that ignore the long-term harms visited upon Indigenous people, that ignore the relative advantage given to those of us of European descent (an advantage not equally shared)? Are we willing to lose our naïve version of church history that forgets the way the church has perpetuated the too-simple stories? There is a loss in giving up those stories. We need not give up our celebrations of grand ideas and significant accomplishments, yet need to hold together the fact that presidents whose ideals we admire also owned other human beings. We need to hold together that westward expansion entailed the displacement of others.

What we might learn, in accepting the more complex stories of our history, though, is that the singing and dancing to which God invites us all is richer and more beautiful when more are included. The feast to which God invites us is more beautiful when we can all show up, even with our wounds and our sorrows, to be kind to one another, to embrace one another, to celebrate one another. To acknowledge our complex history is a crucial part of making the future better, of making disciples of Jesus Christ for the transformation of the world.

Learning can happen amid loss. Maybe we only learn certain things in particular ways when we experience loss. To be faithful in the midst of suffering asks of us honesty and truth-telling and courage, and to know that soon there will be dancing and singing. Even now, there are possibilities for dancing and singing.

Carry all this with you as you continue in ministry into this fall season.

Learning Even in Loss on this Joyful Journey,